According to Emmanuel Swedenborg, the form of a spiral lies at the heart of the created world.

...the essence of the point consists in motion…it’s motion is most perfect in its nature…must proceed from the centre to the periphery, and from the periphery to the center…it must necessarily be of a spiral figure…”
~Swedenborg—Principia Part I, Ch. 2, Sec. 20 + 21

My name is Sharon and I am a New Church Christian. I've always been a Christian...I grew up in the Southern Baptist church and attended both Baptist and Catholic Schools. My parents (mostly my mother) were avid in their devotion to living a Christ-centered life. My mother would often take rest from her daily grind on the bench of our upright piano, progressing her way through the Baptist Hymnal, playing all her favorites. Those are wonderful memories for me, and I still delight in those songs of praise.

Sunday School, "Big Church" and Wednesday Night Supper were a weekly regimen—Casseroles and Jello salads galore! But my favorite was always the sparkling punch with sherbet that tasted like an orange Creamsicle.

I liked Sunday School when I was very young, when it mostly comprised of art projects relating to scripture. But as I got older, I remember feeling distrustful of certain messages—messages about God's anger and wrath, and being condemned to hell, but at the same time being told of His forgiveness and sacrifice for us because of this really big love. How could God love/forgive me and condemn me at the same time? What I heard was a conflicting message that confused and frightened me.

These feelings only intensified when I attended Catholic School. I was "excused" from my religion class one day in my Senior year for arguing with the priest about the meaning of the Trinity. I could not accept the idea of "three persons". Although I could not verbalize it at the time, I inherently knew that "three persons" was not a correct understanding of the Trinity. There is only One Person. I knew this to be true in my heart, and no triangular or Venn diagram would convince me otherwise.

Over the years, I grew further and further away from traditional Christian teachings. I just could not resolve what I felt in my heart about who Christ was versus the messages I was receiving—regardless of denomination. I began to delve into other religious teachings, Buddhism, Shamanism and New Age—searching for truth.

It wasn't until 1984 that I discovered something that changed everything. I happened to pick up a book entitled The Spiritual Diary by a man I had never heard of, Emanuel Swedenborg. I was immediately fascinated by what I was reading: the life of Angels in Heaven, conversations with spirits, love in marriage, Heaven and hell...this was right up my alley! The book belonged to Will Watson, someone who became a best friend and big brother to me, and he warned me once I picked it up, that it would change my life forever...it did.

I liked Sunday School when I was very young, when it mostly comprised of art projects relating to scripture. But as I got older, I remember feeling distrustful of certain messages... 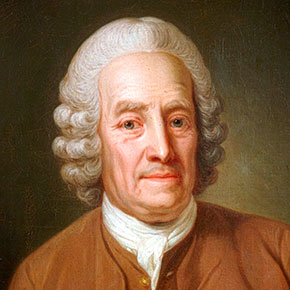 The Writings of Emanuel Swedenborg brought me back to Christianity. But a new Christianity—everything I knew genuine Christianity would be. From the Trinity, to the Second Coming, and Genesis all the way to Revelation—suddenly Christianity not only made rational sense to me, but this new understanding freed me from my fears of death and condemnation—opening my heart to the Lord's Divine Love and Wisdom like never before.

This blog is not designed to convert or convince anyone of Swedenborg's legitimacy. I assume, since you're here, you are already "on the boat", as a dear friend puts it. I'm not trying to cast the net to pull you in. If you're looking for that, may I suggest Off the Left Eye, a wonderful YouTube channel developed by the Swedenborg Foundation. OTLE is a weekly webcast that explains the Writings of Emanuel Swedenborg and how the Writings apply to understanding Scripture and assisting with one's desire to live a spirit-filled life. I watch and often re-watch episodes throughout the week, so it's a great source for both novices to New Church teachings, as well as those of us who have been "in it" for a while.

I invite anyone to respond to my posts, but please be aware, I will moderate all posts before they are available for everyone to read. No negativity or proselytizing will be tolerated. I hope you will all consider commenting from a "higher" place and with the intention of sharing your experiences verses criticizing or shaming others. Having said this, I hope you enjoy reading about my journey and I sincerely look forward to hearing from you.